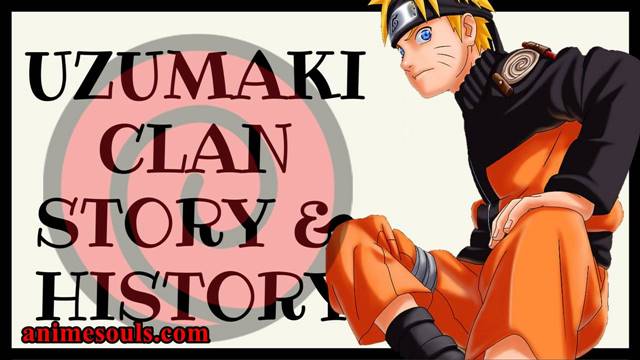 The Uzumaki Clan was not a clan from hidden leaf village. They lived in their own village Uzushiogakure, which was located in the small Land of Eddies. They were mostly famous for fuin jutsus which is an secret speciality most shinobis know nothing about that (you can count the number of Sealing special list’s in hidden leaf village with one hand). The village however was also destroye sometime in the beginning of the Third Shinobi ninja War.The Uzumaki clan is characterized by the insane amount of chakra and red hair, making them excellent jinchuriki, as they can supres’s the chakra of the tailed’s beast partially.
They were originally of the hidden Eddy village. Of the known Uzumaki, Uzumaki Kushina and Uzumaki Mito have been jinchuriki for the nine tails,Uzumaki Nagato was the owner of the Rinnegan, which was, according to Uchiha Madara, a gift.

The reason Konoha (hidden leaf village) has the emblem of Uzushiogakure on their vests is two-fold:

2) They are allies of Konoha (hidden leaf village), in that they supply them with individuals to use as jinchuriki’s for nine tails.

These are all quite secret matter’s. Most ordinary shinobi’s and especially civilians do not thought them selves with such thing’s and Uzushiogakure was legendary for Sealing Technique’s and Longevity, not that kind of stuff they teach kids in the academy (for the  obvious reasons) and when you are on the field, fuinjutsu is kinda useless (unless you have to fight a Bijuu.

The Uzumaki Clan is a important insofar as it was the most powerful clan’s in a village for Fuinjutsu specialist’s and old Konoha (hidden leaf village) allies. It’s not the kind of name that may inspire terror or automatic respect. However I also think that the all previous Jinchuuriki’s were also mostly dismissed for being a female. They practically became housewives to the Hokage’s and nothing else was heard of them. The herd has a short memory for random things.

Karin Uzumaki is also a member of the Uzumaki clan, and she also lend chakra to other’s, helping in the recovery of injured individualss.
I believe Nagato Uzumaki has claim to the strongest among the Uzumaki’s, owing to the Rinnegan, which allows him powers of the Rikudou Senin (sage of six paths). Being able to control all 5 type chakra nature’s, control of seriousness, chakra, super natural summon’s and even Life and Death.

the Uzumakis were never a formal clan’s in the traditional sense and the destruction of their village (Uzushiogakure) didn’t help with that either. It’s safe to assume they were alway’s very low in numbers. In addition, starting with Uzumaki Mito, the clan became the official care takers of the Nine Tailed Fox (Kurama). Jinchuriki being so important of course, its safe to assume Uzumaki’s and Nine Tails fox info became very very hard to come by. If anything I imagine people generally know about the Uzumaki’s as an important clan, way back in the day. something, they scattered and now their a hand full of them but their contribution’s are still appreciated.

It’s more fun to think that the Hokage’s is actually a completely ruthles ruler of a military dictator ship who is able to enforce information control at a level’s that modern society can’t even understand the Most of everything is classified, even general information’s, so that it isn’t generally passed on unless you are in a position’s where you need to know it.

The history of the academy is the a bare bones truth and a lies mixed together. Its only if you hit Jonin that you might be allowed to know the truth behind everything. So Why are Uzamaki’s not known about, cause in Konaha (hidden leaf village) , the first rule of Konaha’s is that you don’t talk about anything of consequence.The real harsh truth would be that Kishimoto made up in the backstory too much later into the manga so its kinda feel like they left out this question. I choose to believe that Konoha (hidden leaf village) people especially the elder’s of the village chose to write out Uzumaki’s clan out of their history due to Kurama having connection to Uzumaki’s (Kushina, Mito & Naruto ) respectively. Or that Uzumaki clans merge with the Senjus as one clan since there’s no Uzumakis left except for Naruto Uzumaki and we know that the villager hate and fear him due to Kyuubi presence.

Tsunade is an Uzumaki ? Always i thought that, being a granddaughter of Hashirama senju, she would be a Senju.??

Well he’s not completely falses, hashirama senju was married to mito uzumaki, being hashirama granddaughter likely mean’s she’s also mito uzumaki granddaughter to, making her literally as much senjus as she was uzamaki. And there’s no confirmation about that tsunade is a senju. We don’t ever see her referre to as such, from all evidence it seem’s as though the senju’s doesn’t actually exist as a clans at all. But we’ve never had Tsunade referre to as senju throughout the series. She’s descended from hashirama, but your clan is determined by your parent’s, not your grandparent’s. It’s entirely possible her senjus parent married into another clan.