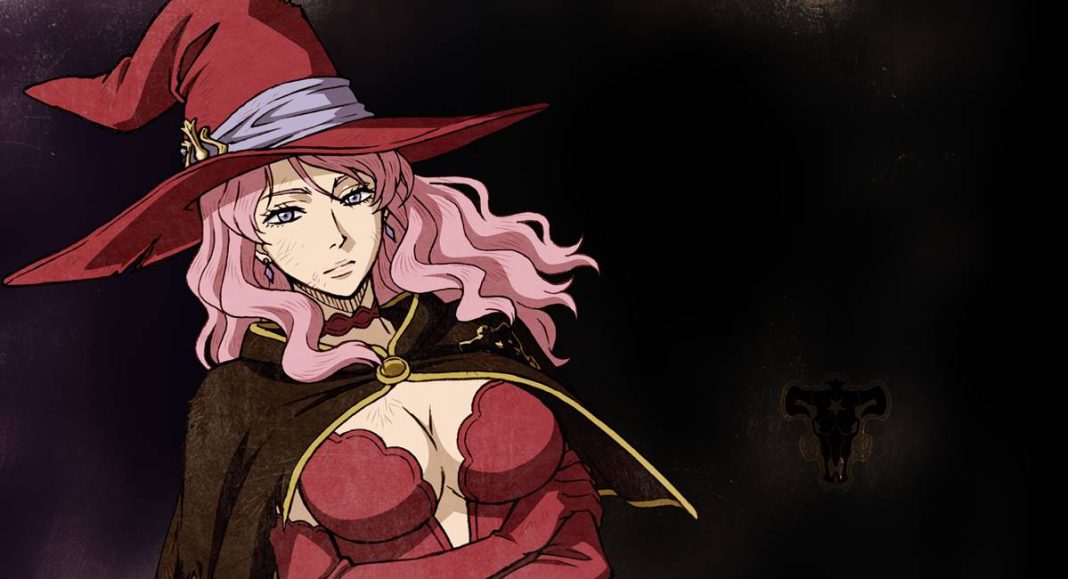 VANESSA: In this article, we will talk about the facts about Vanessa Enoteca. Vanessa is a tall young woman with wavy mid-back length pink hair styled in a lob with bangs swept to the left, purple eyes, large lips, and a voluptuous physique. She is also a loving individual, as she offers her assistance to Noelle in her search for a means to control her power. Vanessa, the purple-haired mage from Black Clover, is a bit of an enigma to fans, but after reading these fascinating facts, she will make more sense.

Vanessa is impossible to forget for Black Clover fans. Until viewers spend more time viewing the show, the mage would nearly appear to be Miss Fanservice. Vanessa is more interested in getting drunk and lazing around the house than in impressing anyone.

She has a lot of mystery about her and where she came from. The list goes into great detail regarding her and her experience since joining the Magic Knights with her family. ‘She’s a vital thread in Yuki Tabata’s universe, even though we don’t see her as much as some of the others.’

Below are the facts about Vanessa Enoteca

1. VANESSA FROM A CITY OF WOMEN

Vanessa has a laid-back demeanour and prefers to take things at her speed. She has a strong preference for alcoholic beverages and attractive males. Others dubbed her the Drunken Frenzy Witch because of her addiction to drink. She has also demonstrated that she is unconcerned about wearing revealing clothing to attract males and that she is most at ease lounging around the squad’s headquarters in her underwear where every one of her squadmates, both male and female, can see her, demonstrating that she lacks modesty.

Vanessa is one of a small group of women who hail from a remote section of the Clover Kingdom. Land of witches exists deep within the forests, all wizards with their power, left alone by the rest of the kingdom. These women aren’t supposed to reside outside of the forest, and outsiders are forbidden.

Yami entered the woodland where all these powerful wizards were without recognizing it and got herself into a lot of danger almost immediately. As a result of this, Yami was knocked into a structure,

where the queen of the witches imprisoned Vanessa in a cage. Yami accidentally damaged Vanessa’s cage, then told her she could live her life as she pleased, prompting Vanessa to follow Yami and join the group.

In the English version, Vanessa is voiced by Lydia McKay, who has previously played characters such as Ultear from Fairy Tail, Kyoko Honda from Fruits Basket, and Boa Hancock from One Piece.

Nana Mizuki, a legendary voice actress, and singer from Japan have voiced a variety of characters, including Hinata Hyuga from Naruto, Tsubasa from Symphogear, and Moka Akashiya from Rosario + Vampire.

Noelle appears in the anime at the beginning as the guild’s second big recruit. While Asta appears to be devoid of magic, Noelle possesses far too much she is unable to control her abilities as a result,

and trying to learn is frowned upon by the aristocrats. Vanessa, on the other hand, goes out of her way to help Noelle learn to use her magic, even assisting her in the search for a magical artifact that can manage her abilities.

5. VANESSA IN LOVE WITH YAMI

Vanessa is in love with Yami, which is predictable given what we know about her background. It’s rarely said, but Yami fell in love with the man because he saved her life when she was so young. She virtually always describes a man who is just like Yami when she talks about the type of man that is her type.

Vanessa competes in a cosplay contest against Charlotte Roselli, which is one of the funniest scenes in Black Clover. Vanessa and Charlotte both understand they’re competing for Captain Yami’s affections during the show’s Star Festival.

Despite Charlotte’s best efforts, she finds herself drawn into a cosplay competition with Vanessa. Charlotte chooses to dress up as a witch, while Vanessa dresses up as a nun.

Vanessa’s reputation as a hard-drinking wizard is mentioned early on in the story. For starters, her Magic Knight title is the Drunken Frenzy Witch, which explains her proclivity for becoming drunk after major missions. But there’s also the fact that her surname, Enoteca, appears to be Italian for “Wine Bar.”

8. HAS WON EVERY FIGHT

Vanessa is interested in that she has never been vanquished in combat. So far in the series, she’s had six battles and has won all of them. Having said that, she tends to work with the rest of the Black Bulls in all of her matches,

which means she isn’t winning battles on her own, but she doesn’t have to. She may assist others in their struggles and is significantly more effective as a backup.

Vanessa has a three-leaf clover grimoire, signifying that she is capable of standing alone, but she lags behind some of the higher-level mages. Rather than her mana pool, which can run out rapidly,

she’s best recognized for the exquisite control she has over her magic. It’s difficult for her to keep her strength up just sustaining her particular magical cat, and we’ve seen her run out when she isn’t backed up by her buddies.

Vanessa’s mastery of thread magic was the reason she was hunted down and imprisoned by her mother. Vanessa would one day learn the capacity to wield magic, which would allow her to control fate itself, thanks to the Witch Queen’s ability to see into the future.

The Red Thread of Fate, which is symbolized by Rouge, a beautiful little magical cat, was born from that power. Rouge can protect everyone Vanessa cares about, which includes all of the Black Bulls, making them more difficult to destroy.