Home ANIME What are the Names of the Frogs in Naruto? 2022 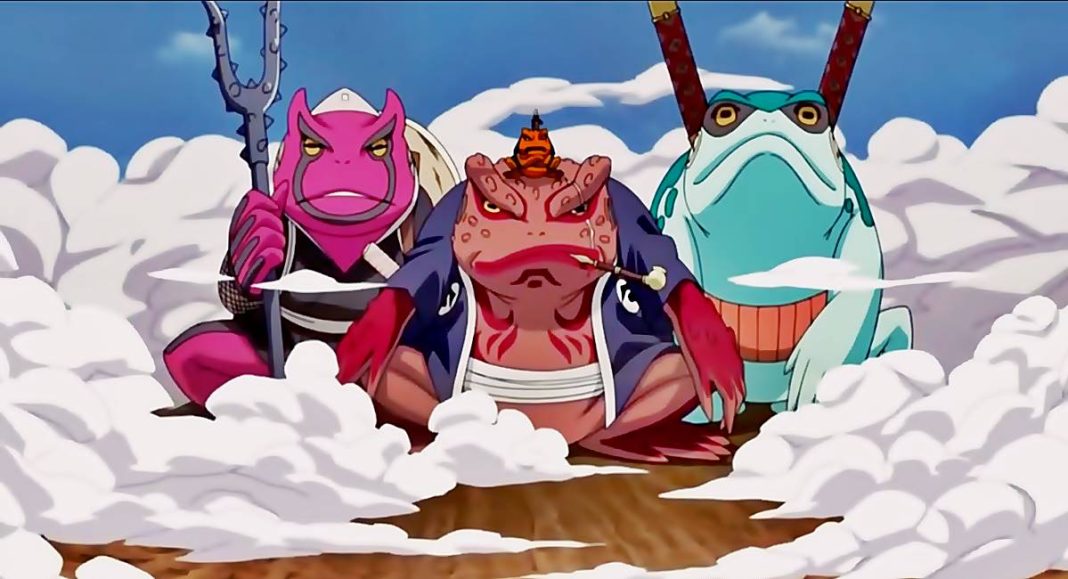 Frogs in Naruto: Given that several of the key characters, including Naruto Uzumaki, Jiraiya, and Minato Namikaze, have the ability to call creatures, toads are the summons that are most frequently seen in the anime. On Mount Myoboku, they are based. Toads have a variety of skills, including the ability to use their own tongues and other objects as weapons and spit water or oil from their mouths. They are the few species that can perform ninjutsu, and they are also one of the few creatures that can communicate using hand gestures. This is what makes them so unusual.

Toads can be summoned on the battlefield with the great force since they are skilled in senjutsu. View the list of frogs in Naruto in this article.

An elderly toad who lives on Mount Myoboku, Fukasaku, is also known as “Head” and is over 800 years old. He and his wife Shima are honoured as the “Two Great Sage Toads” because they are the Great Toad Sage’s descendants. A green toad named Fukasaku has white hair that has been groomed into a sort of mohawk, very thick brows, and a little goatee. Two different capes—one with a high collar and the other with a plainer collar—have been observed on him. Fukasaku and Shima are quite powerful in battle. Fukasaku may swiftly use his tongue to attack when Shima sends out a serpent-like creature from her tummy to hunt out the adversary.

The first toad named in the series, Gama, makes her debut with Jiraiya. This particular toad appears to be the scroll’s keeper for the Toad Summoning contract. Gama’s personality is largely unknown because he has not yet been heard speaking;

he has only made a few croaking noises, especially in anime. He was also the only summon displayed to strike the same position as Jiraiya, suggesting that he is very loyal to Jiraiya. Gama follows him about and promptly complies with his instructions.

Shima, a renowned elder toad from Mount Myoboku, is known as the Mother of the Toad Way. She and her husband Fukasaku are together referred to as the “Two Great Sage Toads’ ‘ as they are the successors of the Great Toad Sage. Shima is thought of as having an open heart, and because of the way she is, she is able to perceive things extremely clearly. She is regarded as the “Mother of the Toad Way” by all toads as a result. Shima has a purple underside with a green upper side and purple markings around her mouth and back. Shima is renowned for her excellent observation of the events and conditions surrounding the wars she takes part in.

From Mount Myboku, Ksuke was a messenger toad. He appeared to be an upbeat and joyful toad that readily followed directions. Ksuke had blue marks on the top of his head and around his eyes, with a red primary coloration. He was also sporting a set of green goggles. He carried the word “gold” in kanji on his back. Ksuke was renowned for his lightning speed and exceptional stamina.

The dominant toad of Mount Myoboku is called Gamabunta, often spelled Bunta. Gamabunta is an unflappable, unyielding, and utterly apathetic toad. Except for exceptionally skilled summoners who command his respect, he dislikes following commands from anyone. Only a few handful have been granted unquestioned access to riding on top of his skull, including Jiraiya, Minato, and Naruto. While he is fairly secure in his fighting skills, he is also conscious of his limitations and perceptive to the might of his foes, as evidenced by his concern when facing Shukaku head-on.

From Mount Myboku, Gamakichi is a toad. Additionally, he is Gamabunta’s oldest child and Gamatatsu’s elder brother. Naruto Uzumaki has summoned him specifically. Gamakichi has the mannerisms of a smart aleck and is really comical. In most settings, he is also quite lighthearted and frequently very condescending, favouring conversation over combat because it is less serious. Since he protected Naruto from Gaara in his small Shukaku form, he and the character have grown close. When called, he usually responds with a “Yo” to everyone.

On Mount Myoboku, there lives Gamagor, a gigantic toad. The friendly and differential Gamagor addresses his summoner with honorifics and even makes the bold promise to follow Konohamaru anywhere he desires. The bottom of the enormous, lighter-purple toad known as Gamagor is covered in scales. His eyes are surrounded by red marks. Konohamaru summons Gamagoro to show academy pupils how to use the summoning technique. He is dismissed following the demonstration.

On Mount Myoboku, there lives a gigantic toad known as Gamaken, sometimes known as simply Ken. Gamaken is quite unassuming. He frequently appears anxious and repeatedly mentions how awkward he is. He once more complains to Gamabunta about how awkward he feels while battling the summons of the Animal Path during Pain’s invasion. Despite this, he hasn’t demonstrated any evidence of being any more clumsy or “ungraceful” than the other toads in the series,

though he also promises to always try his best. Gamaken is a massive magenta-colored toad with black patterns on his face, arms, and legs as well as horn-like protrusions on his head.

Gerotora is a scroll toad native to Mount Myoboku, a rare species that maintains the information inscribed on its scroll-abdomen with vigilance until the death of the person who contracted it. He is well known for his exceptional stamina and resides in the belly of his contractor. He is a toad that is black and orange with dark patterns on his mouth, eyes, and underbelly. Gerotora can extend his abdomen to show a scroll that, when hidden, creates the impression that he is wearing an obi because he is a scroll toad.

The toads that live on Mount Myboku include Gamatatsu. Along with being Gamabunta’s youngest child, he is Gamakichi’s younger brother. With orange accents around his eyes and mouth, Gamatatsu has a primarily yellow coloration. On his tummy, he also has two indented markings. He was small enough in Part I to fit on Naruto’s head; however, in Part II, he has grown to the point that he can now hold Naruto up on his head and swallow an adult. He’s wearing a blue vest like his brother.

On Mount Myboku, there lives a gigantic toad known as Gamahiro, also known as simply Hiro. Gamahiro is a gigantic toad, albeit, like Gamabunta, his size is shown inconsistently; he is typically described as being taller than structures and trees. His shoulders have two distinct, round marks, and his skin is aquamarine with golden eyes that have grey outlines around them. With an orange sash around his midriff, he wears an orange sash and carries two enormous katanas on his back as his main weapons. He had a brown colour in Part I of the anime.

From Mount Myboku, Gamariki is a toad. Gamariki tends to act in a very flamboyant manner and frequently conveys his feelings through gestures of the body. He also has a propensity in the Japanese version to use charming language when referring to people whose names finish in “-chan.” On the other hand, when he was serious, his voice—which was often high—took on a deep, sombre tone, which is said to be his typical voice.

The oldest and most revered toad of all Mount Myboku’s residents is Gamamaru, also known as the Great Toad Sage. The other toads call him Great Honourable Geezer because of his advanced age. He is renowned for giving remarkably precise prophesies. He is one of Mount Myboku’s largest residents, easily matching the sizes of Bunta, Ken, and Hiro. Gamamaru has a white tummy, is brown in colour, is quite wrinkled, and he frequently squints. He is donning a professor’s hat with tassels and an orb on top. He also sports a necklace with the toads’ village’s “oil” emblem on it.