The Elements as they are the so many general basis of kekkei genkai/tota. Each element is strong against one other element (forget about the what element it is weak against ill get to that) there for a shinobi with the ability to use one element has a distinct ability to the reduce resistance of his opponent’s body to elements and chakara. Shinobi who are only able to use taijutsu and regular ninjutsu (Ten-Ten and her weapon’s are an example) mainly focus on improving their over all body composition, speed, strength, skill, etc., and have no ability to resist element’s (which is why they forget about them and the focus on improving their body). Kishimoto hasn’t gone into enough explanation for me to figure out how you combine the genjutsu with elemental and ninjutsu for me to explain how its done or if a tota is achievable, so ill forget about that (i only watch the anime not manga so shikamaru who almost got into it earlier may explain it during the war i dont know haha).

Shinobi’s are usually born with an element (Wind, Earth, Water ,Fire, Lightning). I believe this is a genetic. Which is why shinobi’s from the same clan’s are able to use the same jutsu. I believe that the Kekkei Genkai is a genetic mutation, or rarity in structure. It happend when someone is born with 2 nature’s in them. Kekkei Tota is an even rarer genetic abnormality where 3 element’s are seen at birth. Its my theory then that Tota is teachable and creatable in any person born with 3 nature’s, and the same with genkai and any person with 2 nature’s.

The battle capability of one nature’s is to by pass one resistance, if they are posses the correct complimentary nature. Your own resistance to enemie’s concept would be the same, which is why earlier i didnt get into it. Kekkei Genkai users have are born with 2 nature’s, since they have 2 complimentary element’s, and 2 other elements would be the original two possess only one elements is able to correctly attack and the defend against a kekkei genkai.

I also believe the difference between tota and genkai is a fatality factors. Genkai is survivable even amatseru has been seen defende against effectively. Tota is the completely and totally fatal if you are hit. With 3 element’s there are no element’s which are not the same or complimentary there for if a shinobis is hit by a tota user and is unable to escape like tobi then the shinobi is dead.

This is the danger of tota particle style is the only one currently known example i can use. Wind, Earth and Fire leave’s the opponent’s body no resistance to element’s and is then unable to survive the assault of chakara and elemental damage and is reduced to some vaporize microscopic dust.

One of my own idea would be an extension of Haku ice style. Polar style would be wind ice and the earth. With earth combined you could serge ice through mineral’s at a molecular level. The ground could be wide spread rapidly from one’s feet all object’s containing mineral or water (human) would be instantly frozen and shatter to a similar type of the dust seen in particle style. 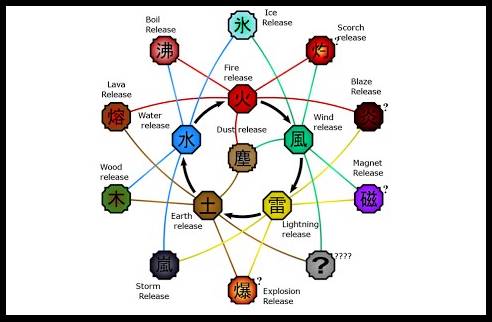 Dust Release (Jinton, 塵遁 Viz: Particle Style) is a combined nature’s transformation kekkei tōta an advance version of kekkei genkai made up of technique’s that mix wind, earth, and fire-based chakra to create pulverising force. The technique of this nature in the beginning form as a small three dimensional object (e.g. a cone, a cube, etc.) composed of chakra that form between the user hands. When the technique is released, the form expand and surround the target. This nature allows the user to manipulate molecule’s, giving them the ability to disintegrate anything on a molecular level with in the boundarie of the three dimensional form.

Glass Release (Haton 玻遁 Viz – Quartz Style, English TV – Glass Style) is the advance nature kekkei tōta that appear in some member’s of the Mizuiro clan’s, and allowe the user’s to combine lightning, earth and water based chakra to create glass.

Forest Release (Shinton (森遁) is an advance nature the kekkei tota, an advance version of the kekkei genkai, which is create by combining Water, Earth, and Yang nature’s. The technique of this nature allow the user to manipulate, create, and control high density of tree’s and by extension allow the creation and manipulation of the wood. By utilizing the life giving propertie of the Yang Release the user can breathe life into tree’s and accelerate their growth allowing one to create a single or a large number of tree’s. Technique that consist of creating and manipulating tree’s are called Forest Release Technique ( Shinton no Jutsu 森遁の術) Makoto Shiryu is the only one who is capable of utilizing this unique form of chakra natures. Being the originator of the ability Makoto has displaye a variety of unique skill’s and abilitie, such as being able to control vines, create or grow any type of trees he desires, and even manipulate the plant life to a certain degree. He is a highly sought out individual due to his unique ability to use these technique and has been constantly pursue ever since word of his forest release abilitie’s reache the five great shinobi nation’s. Forest Release technique are highly versatile elemental technique’s, with the ability to completely reshape the battle field to ones own advantage. The Forest Release Nature is very similar to the First Hokage Wood Release Nature though it is unknown if the two nature’s are related to one another.

Mind Release (Shinton Viz: Mental Style) is an advance nature kekkei tota compose of the lightning, yin and yang nature’s type to utilize technique’s that are centere around the brain.

Erase Release ( Shoton 消遁). Erasure is the act of removing something. Both water and wind are associate with removal of thing such as blowing stuff away (such as blowing out a fire or blowing away dust) and washing out and diluting stuff. This natures would act using these qualities associating them with Yang Release, which would create an imbalance of the targets Yin and Yang, over whelming it with Yang causing the Yin (responsible for form) to collapse.

The Rust Release (Seiton 錆遁) is a powerful kekkei tota that combine the Wind, Water and Earth elemental nature’s. Technique of this nature appear as a fine maroon coloured dust create from chakra that cause rust and decay with everything they come into contact with a Being in dust form the small particle can be difficult to see making them even deadlier if they can cloud up an area. The main draw back of Rust Release technique is that they cannot be used to effect chakra based object’s without obscene amounts of chakra to back them up, rendering them useless against such things as clones.

Nova Release ( Seiton 新遁) is Kekkei Tota possesse by Seigo Nakano, who passe it down to his daughter. It is created by combining his Lightning, Fire and Yang Release. By rapidly ionizing and release energy in between the palm of his hand’s. Seigo is able to create various novas.

Smoke Release ( Kemton 噴煙 VIZ – Smoke Style) is an advance nature kekkei tota that originate from the Sarutobi clan. This kekkei tota is combined with Earth, Fire and Yin Release which gives the user the ability to utilise smoke/ash in different propertie and usage. This kekkei tota was origanally create by Konohamaru who used his own version by combining Earth,Wind and Fire chakra nature’s to make ash.

Phloem Release is a Kekki Tota that combine Release, Water, Lightning Release, and Earth Release to allow user the to accelerate plants growth at a super fast rate. The use of it operate of the water, sun, and earth principal of growing plant’s. The earth provide a base, the water nourishes and the lightning accelerate the growth.