Home ANIME Who is the weakest Akatsuki Member? 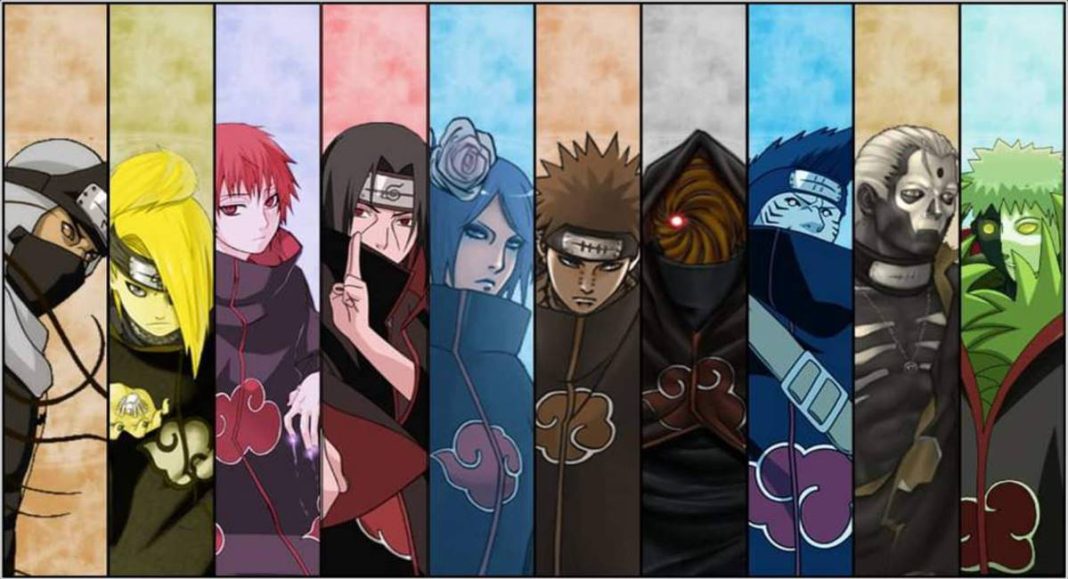 Who is the weakest Akatsuki Member?: It makes sense that the excellent Naruto series has so many fantastic antagonists if a story is only as good as its villains. There are a lot of villains who come and go, the enigmatic Akatsuki organization is one of the most persistent bad guys in the anime. This group, made up of ninja who fled their native territories, changes its intentions as the plot develops, but Naruto’s heroes nearly always have to fight them.

The Akatsuki were first created as a solution to prevent warring nations from annihilating smaller villages, but as their leader began to feel that the only way to stop this carnage was to rule over humanity, the Akatsuki turned into an enemy army. The Akatsuki are one of the most powerful factions in the whole Naruto universe, despite their modest size. Even the most skilled ninja couldn’t stand a chance against its members, who can even tame the terrifying Tailed Beasts. However, not all Akatsuki members are as strong as the others, with the members of the older generation being noticeably weaker than those of the later generation. This strength disparity isn’t very shocking, despite the fact that certain team members are practically unbreakable demigods.

The most evil groups in the Naruto series is the Akatsuki, and several of its members have been crucial to the main plot of the novel. Itachi, Obito, and Nagato, three of the organization’s most powerful members who had beaten some of the strongest shinobi in the Naruto universe, were among the strongest characters in the series.

Fans have ranked and compared the members of this organization based on their physical prowess and combat prowess ever since it was first depicted in the series. The group comprises some of the series’ most fearsome fighters, but there are also a few members who aren’t nearly as strong.

In order to compare them to other contenders for this position, fans want to know who the organization’s weakest member is. The analysis is why we are here.

Who is the weakest?

It’s crucial to comprehend the standards for selecting appropriate characters for this comparison before we proceed with the discussion. A character’s weakness is correlated with their poor ninjutsu skills, battle wisdom, physical prowess, and all-around combat prowess. Let’s consider who the weakest Akatsuki member in Naruto might be now that the selection criteria have been established.

Kie was a founding person of the Akatsuki, a guerilla group that fought to prevent larger countries from destroying the Hidden Rain Village. He isn’t extremely strong, though, and it’s unclear what kind of skills he possesses.

In order to convince Nagato to gather the Tailed Beasts with a more powerful iteration of the Akatsuki, Madara Uchiha vanquished him, as she did with many of the first generation members of the organisation. Although there is a chance that Kie will rank well on this list, given his little screen time and minimal impact on the plot, it is more likely that he was an average to below-average ninja.

The attack on the group by Madara Uchiha was really survived by Daibutsu, another member of the original generation of Akatsuki. Before they could influence Nagato into using the organisation for their personal gain, he attempted to fight Tobi and Zetsu, but to no avail.

To weaken and exhaust opponents so he may imprison them in his Water Prison Jutsu, he uses his tremendous size and power to wield enormous, blunt weapons in battle. The majority of the other members of the original Akatsuki are simply stronger than him, and even if he were one of their strongest, he wouldn’t be able to compete with them due to his more limited ninja skills and poor knowledge of more advanced methods.

The best puppeteer ninja in Naruto, Sasori is also almost indestructible. He has a number of secret weaponry and can call an army of up to a hundred puppets manufactured from people that still have their powers. Sasori, having made his own body into a puppet, is likewise impervious to all poisons and does not actually sustain any harm from attacks that do not directly hit his flesh core.

Sasori’s fierceness in battle primarily stems from his ability to ambush his adversaries with a variety of covert moves and techniques. He becomes far less of a threat and is simpler to defeat with sufficient raw might or by taking advantage of the flaws of his puppets if someone knows about his hidden puppet body and puppet arsenal.

Hidan, who was single-handedly defeated by Shikamaru in the earliest chapters of the series, is the first person that comes to brain when discussing the weakest Akatsuki members. When compared to characters like Itachi and Obito, Zetsu doesn’t give nearly as much screen time, making him simple to forget. Zetsu, which combines Black Zetsu and White Zetsu, is without a doubt the weakest member of the Akatsuki.

One of Infinite Tsukuyomi’s initial victims, White Zetsu was rescued by Black Zetsu utilizing the Gedo Mado after becoming one of the trap’s first victims. The Hashirama cells and the White Zetsu were later fused by Madara.

Techniques that would be helpful in a 1v1 battle are few to nonexistent for this character. His two halves can interact with one another by underground roots, and he has the capacity to divide his body in half. His skills are suited for the job of a spy because he can quickly relocate to numerous locations thanks to techniques like Mayfly, which is also his hallmark move in Naruto.

In addition, while he can use Wood Release, he lacks Hashirama’s level of proficiency, making it useless in combat. Zetsu will be no match for characters like Hidan and Sasori, who are said to be among the weakest of the Akatsuki clan. Zetsu’s primary skill set was demonstrated throughout the course of the series in his use of manipulation techniques.