Home Entertainment Who was the 1st Marvel? 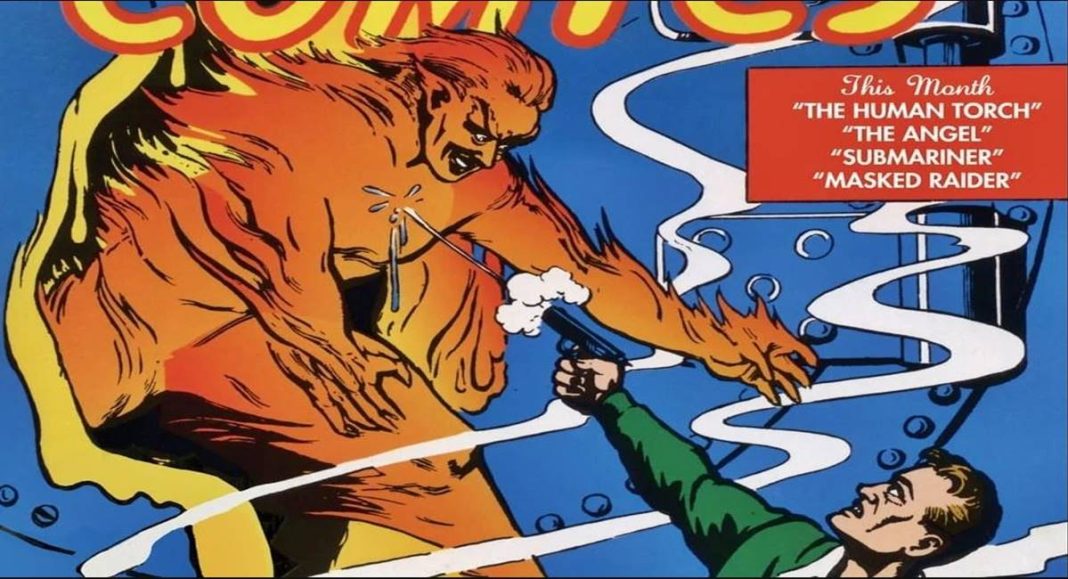 Who was the 1st Marvel?: In its inaugural issue from 1939, Human Torch, Angel, and Namor the Sub-Mariner were the three superheroes that Marvel Comics first debuted. But since Human Torch was listed first, we might consider him to be the very first Marvel Comics superhero. The inaugural comic book from Timely Comics, the company that produced Marvel Comics, was Marvel Comics #1, which was released in October 1939.

It’s always intriguing to learn about comic book history. Even though we are familiar with all of these characters in their contemporary forms, the majority of them have a long history of appearances, that is, at the time this piece is being written, progressively approaching a century. In the fictional Marvel Comics universe, he is the oldest superhero, and one of those characters is the subject of today’s post. Who is he? To find out, continue reading.

Who is the Human Torch? (1st Marvel)

A superhero named Human Torch is created by Marvel Comics and appears in their storylines. The first tale in the now-classic comic book Marvel Comics #1 (1939) saw him make his debut as Marvel’s first superhero. Carl Burgos, an artist who also penned his original story, invented the Human Torch.

He was the first superhero, and he battled Namor in their first meeting, hence he is also responsible for Namor’s “discovery.” Almost entirely forgotten after the 1950s, the Human Torch (1st Marvel) is a figure who is intimately connected with the Golden Age of Comic Books. Throughout the 1970s, he gradually came back to life and is now a recurring figure in the modern Marvel Universe, although one who serves as a supporting actor.

Professor Phineas Horton developed the android Human Torch (Jim Hammond). Because he could control flames and surround himself with them, he was at first thought of as a scientific freak. However, he quickly learned human morality and transformed into a superhero. Jim Hammond serves the New York City Police Department as an officer in daily operations (NYPD). Due to his ability to envelop himself in flames and control them, he was at first perceived as a scientific freak in the superhero world, but he quickly became morally compliant.

In animated form, the Human Torch can be viewed in video games and television shows. Additionally, the character appeared in Captain America: The First Avenger in a cameo as an exhibit. He should not be confused with the Human Torch, who is a member of the Fantastic Four and whose true name is Johnny Storm. The Human Torch is a more well-known character by the same name. Despite sharing the same superhero name, the two are very different personas.

We’ll briefly discuss Jim Hammond’s superhuman traits and skills in the comic books before we finish our history lesson.

Human Torch is a superhero, although in contrast to many other superheroes, he is somewhat unexceptional. He is not very powerful (he is comparable to a healthy, fit male in his 20s), but because he is an android, he is more resilient than the average person.

His primary and most notable superpower is pyrokinesis, which allows him to control fire and, among other things, surround himself in flames. The term “plasma form” refers to either a whole (whole body) or a partial version of this (certain parts of his body). In his more powerful Plasma Form, known as Nova Flame, Human Torch can achieve temperatures of one million degrees Fahrenheit by engulfing himself in a ring of fire. He is able to fly.

He is resistant to any fire-based attacks, which actually makes sense when you think about it, and is able to control other flames he comes into contact with. Along with being able to produce radiation, he also possesses thermokinesis—the power to mentally manipulate the heat energy that surrounds him even when he is not on fire.

Jim Hammond’s major flaw, apart from the apparent need for water or anything else that can put out a fire, is that he is unable to maintain his plasma state for longer than 16.8 hours, which represents a very large source of energy loss. While more than 16 hours is hardly a short amount of time, it would be odd if he returned to his ordinary android shape in the middle of a difficult and crucial battle, right?

One of Human Torch’s Superpowers is:

A. He is resistant to any fire-based attacks, which actually makes sense when you think about it, and is able to control other flames he comes into contact with.

B. Along with being able to produce radiation, he also possesses thermokinesis—the power to mentally manipulate the heat energy that surrounds him even when he is not on fire.

Among Human Torch’s flaws are some of the following:

A. His greatest vulnerability is contact with water or anything that can put out a fire.

B. Jim Hammond’s inability to maintain his plasma state for longer than 16.8 hours is another vulnerability, as it represents a very large source of energy loss.

Thanks for reading this Marvel blog.