The Uzumaki clan was a famous clan in Uzushiogakure. They were the direct descendant of the Sage of Six Paths, with their branch clan Senju, who used to be the same clan in the past.

The Uzumaki clan was attacked by the joint forces of Lightening Country, Hidden Mist Village of The Water Country, and the Hidden Stone Village of The Earth Countrythey asked for help from Konoha – but reciev Nothing, as the Senjus didn’t see any benefit for the Hidden leaf village by helping the Uzumaki survive any further.
The Uzumaki fought vailantly, eliminat three fourth of the combine force, but in the end, the clan was annihilated.
but some managed to survive and escape.

Aside from these are the lost and scattere unknown member’s along with Mito and her brother Arashi Uzumaki , who had a hand in Uzushiogakure’s distruction.

They Have good relationship with each other,as a sign of this, Konoha integrat Uzumaki clan’s symbol on their jackets. 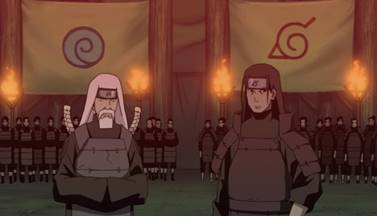 The Uzumaki Clan was at first divid into two familie’s – The Main Family’s and The Branch Family’s. The Main branch consisted of pure blood Uzumaki clan member’s. All of the Females in these Familie’s possessed the Uzumaki bloodline {The Kanzen Tentai}. Because of rarity of The activation of the Male bloodline Rinnegan, the Males mostly didn’t activate it and those it’s existence was uncertain.
The Branch family’s , jealous from the Main branch family’s for possessing their bloodline – killed Their own clan head’s and took his sword From Him , The Ryūjin was deserted the clan. Later they came to be known as the Senju’s clan and establish Konohagakure no Sato.