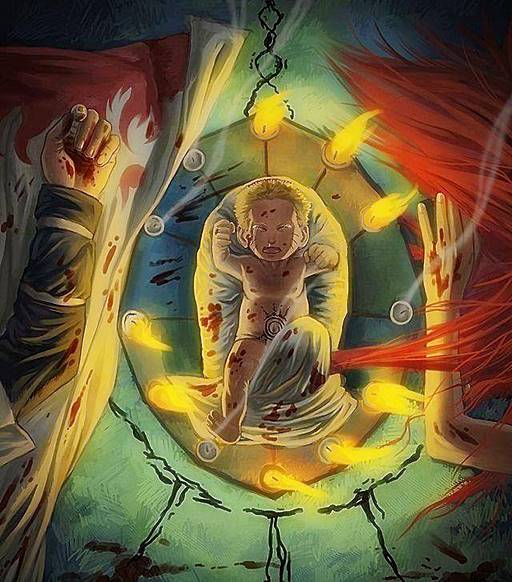 Minato Namikaze first fights Uchiha Obito and expends a lot of chakra to beat him. Then he tackle Nine Tails who’s on a rampage. He teleport’s a Tailed Beast Bomb away from the hidden leaf village, and then he teleports Nine Tails away too. Obviously, He requires crazy amounts of chakra. But he’s Minato Namikaze, right? So let’s say that he still has a little left. Then Nine Tails tries to attack new-born Naruto Uzumaki and Minato blocks it by getting himself impaled along with Nine Tails. He’s dying, how much chakra can he have, and how much chakra control can he have?
he was low on chakra and control, it becomes obvious that he can’t seal the entire Nine Tails back into any of them, be it Kushina Uzumaki, Naruto Uzumaki, or himself. So he HAS to use the Reaper Death Seal, which if you think about it, require two souls one of the caster, and one of the target – to be locked away in the belly of the Death Reaper (Shinigami) permanently, battling each other into oblivion. Minato Namikaze has to use this Jutsu to split the Nine-Tails’s chakra into two half, and once he uses it, he has to be sealed away with one half of the chakra. As for the other half, there’s an explanation for that too. Kushina Uzumaki was an Uzumaki, as was the previous Jinchuuriki of the Nine-Tails, Mito Uzumaki, Hashirama’s wife.
The Uzumaki were known for their sealing technique and both these women had sealing technique that were meant to SUPPRES a Tailed Beast’s. Minato Namikaze knew that the Masked Man (Obito) was after the Nine-Tails or wanted to do some damage to the hidden leaf village in some way, and so he chose to put hidden leaf village or his son who would have a chance to controlling it rather than into his wife who would just continue to suppress it. Minato knew that the masked man (Obito) could come back at any time for the Nine-Tails and without being able to use its power, the hidden leaf village, Naruto Uzumaki, and Kushina Uzumaki would be helpless.
After all of these logical explanation’s, it’s also require to note that Minato Namikaze is a character who is human and has human limitations. Merely being to able think about all of this when his wife and he are dying, the hidden leaf village is under attack, and his just New born son is in danger, is not a great thing. Sure, given more time, he might have been able to formulate a better plan, but that’s not the point. He did very well and prove that he’s not only quick with his attacks, but also in his thought’s.

Minato Namikaze is fighting Nine-Tails and decide to seal the Nine-Tails. Since Nine-Tails has been predominantly sealed inside Uzumakis because of their seals, body structure and Fūinjutsu, Nine Tails for years was seal inside them. Since Minato Namikaze was not an Uzumaki but he was well skilled and learned in the sealing justu he could do what he was able to do. He knew his body won’t hold the Nine-Tails for long and decided that. See the situation. Before sealing Nine-Tails in Naruto Uzumaki and he realised that the child won’t be able to hold much of it. Well, he just thought of that. He was ready to take the chance but was quite unsure about that in himself. So Minato Namikaze used death reaper seal to seal the Nine-Tails becuase at his state his seals were not enough to accomplish what he did. It’s a fact that Shinigami gives the caller immense sealing power at the cost of what is remaining with their life. Minato Namikaze was already so much injured and what remained of him was his will to save his son. See the situation even after giving his soul to the Shinigami he was only able to Seal half of Nine-Tails. JUST HALF OF Nine-Tails. After giving his life, he just manage to seal half of inside him. And you know the only reason he was able to manifest Chakra Cloak after he was reanimated was because his body was under going rapid healing in his dead state. So, if he were alive, and tried to use it, or even just the chakra of half of Nine-Tails inside him, Nine-Tails would’ve taken control of him. So, even if he was a so strong in sealing jutsu, his body wouldn’t have allowed him to do this so. It was a miracle that he was able to seal even half of Nine-Tails but it was more of a miracle that Naruto Uzumaki survived sealing of the other half when he was a merely aged hours So see, body does make a difference. Minato Namikaze knew he wouldn’t be able to seal the whole Nine-Tails inside him. Rather what would’ve happened was Nine-Tails would’ve taken control of Minato Namikaze because of his body’s uncompatibility and again gone berserk making it difficult for hidden leaf village. He was a genius in his own way. He knew the best not only to save his hidden leaf village but his son. I wish we could see more of him.

He performed death reaper seal Consuming Seal to cut the Chakra into two halves. And then he sealed half of the chakra into itself and rest he sealed into Naruto Uzumaki making him a jinchuriki of the Nine Tail Fox.There were many reasons of doing this but one was the prime to think about that if Tobi (Obito) would come again to strike hidden leaf village then it would be impossible to stop him because Tobi (Obito) would be more powerful than ever before.

Main doubt’s that are asked on this matter are the following :-

1)Why not seal the first half of it in Kushina Uzumaki?

Minato Namikaze is the one sealing it and he use the Death Reaper Seal a sealing jutsu that jutsu seal the KURAMA with in the user and both die.He cant use the Reaper Death Seal to seal a Nine Tail Fox’s in someone else as per the little information we have regarding the sealing jutsu.

2)What if Kushina Uzumaki used it? All alive all good? No!

The moment the seal was being used Kushina Uzumaki was seen using his another sealing jutsu {The adamantine sealing chains} to bind the Nine Tails. She says I’ll use the little chakra i have left to save you both, so there for she probably doesn’t have enough chakra to use another Jutsu . And there’s also the fact that she had’nt probably thought of the Death Reaper seal cause she is shocked on seeing Minato Namikaze use it.

3)Why They use the death reaper seal and why not the “Eight Trigram’s seal”?

Before Toby (Obito) vanishes he says that someday he’ll again control the nine tail’s. Minato Namikaze probably think’s about it and uses the death Reaper seal to seal the ‘Yin’ half of Nine-Tails within himself so even if it were to be released its chakra and his power would be reduced to his only half of its not full strength.The Eight Trigrams Seal the entire chakra of a Nine-Tail’s within another so sealing half of it would be not possible.

4)If the death reaper seal was meant to seal the Nine tail’s in the user, how is it possible to seal only half of it unlike the Eight Trigrams Seal ?

this is just a theory. The yang and Yin are opposite complementary entities that form a souls according to certain Chinese philosophy. With the this in mind it can be assumed that a every souls is actual 2 different entities fused together and the death reaper seal manages to separate them and seals one of it or the souls as a whole,where as the Eight Trigrams Seal does’nt seal the souls but seals the chakra.

Minato Namikaze seal’s only half of the Nine Tail’s Chakra in him believing that the Naruto Uzumaki His Son is the child of the Prophecy .He believe’s that Naruto Uzumaki will be able to over come it and control it.This way he can use its immense Nine-Tails chakra for his advantage and when the he need that in any situation of needs arises he can bring out the power of the Nine Tail’s.