Home ANIME WHY ZORO: MIGHT BE A DAIMYO OR A VESSEL? 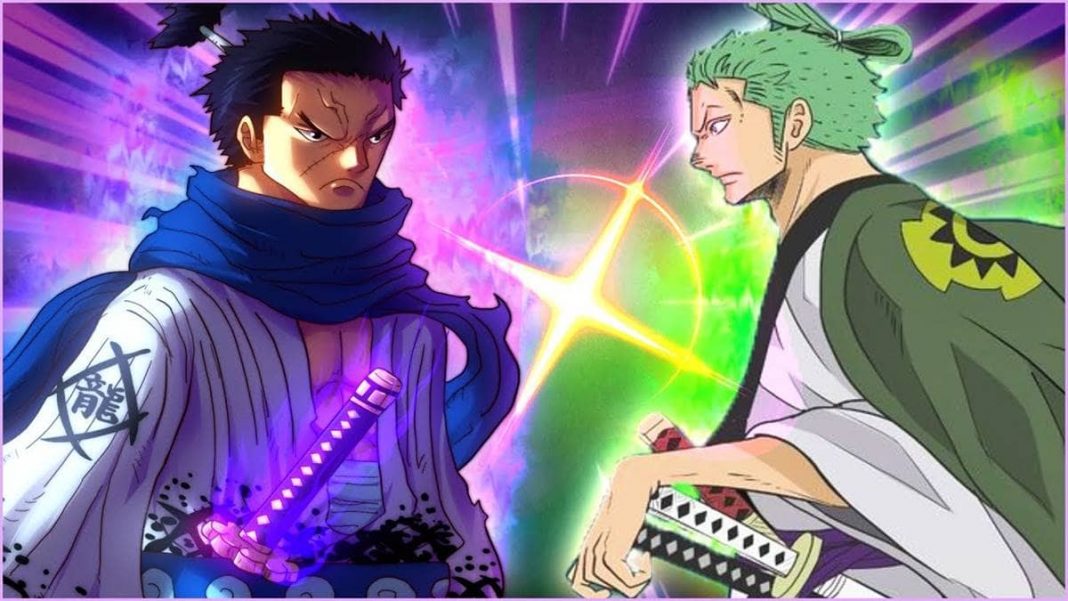 WHY ZORO: MIGHT BE A DAIMYO OR A VESSEL?

Zoro Teacher AKA Kuina Father(Koushirou), is a direct descendant of the Shimotski Family,

the question we should be asking is how close to Ushimaru and Ryuma he was?

No one knows Zoro’s parents but as we can see he looks like a direct descendant of Ryuma and Ushimaru,

Boss-Hyogoro acknowledged that the sword style looks familiar & we can thank Koushirou for that feat, but I don’t believe it at all.

Obviously, with time Zoro crafted his technique but the fact remains how Boss-Hyogoro was able to make out Zoro’s Santoryu style

and said the way he handles the sword is similar to Ushimaru.

Why would Zoro go to Koushirou Dojo? would he want to pick up a sword?

Maybe it was implante in him before the Dojo!

Another thing to consider is the timeline for Ushimaru & Zoro, as according to that timeline their age matches perfectly,

I have started to believe that Zoro did come from wano & Ushimaru might be his father,

they have uncanny facial features down to ryuma. He might’ve been a baby at the time so he won’t remember,

Due to the mass slayings, he was sent abroad to the East blue where he met Koushirou.

How did Zoro gravitate towards the Dojo? Did he walk in willingly or was he dropped off?

If Zoro walked in willingly, who urged him to be a swordsman? We can’t say Kuina because that was part of his ambition. He might have been drop off at the Dojo.

Why did Koushirou take a liking to him?

Koushirou takes a liking to him more than the others maybe he knew in the back of his mind that Zoro is from wano,

So after the situation with Kuina he observed Zoro’s behaviors and researched his own, It’s like after that situation

he knew to place it in Zoro’s hands like he was waiting for Zoro to ask.

Without Hesitation, he handed Zoro Wado Ichimonji one of the 21 Great Grade swords to a kid so easily hesitation like he was going to rewrite history, Now when I think about it,

he actually might’ve harmed his daughter to pass this sword onto Zoro purposely,

same way shanks gave Luffy the straw had after hearing his speech about becoming a great pirate. The only difference is Zoro is moving on Kuina’s ambition next to his own due to the promise, Koushirou Shimotsuki is from Wano he fled because of the bloodbath(that’s what I’m assuming).

Another thing is that Denjiro seems almost identical to Koushirou might he be Denjiro’s father or a distant relative,

They can’t be the same person because Denjiro was in Wano the whole time Kaido was there,

Koushirou was there to raise Zoro during the time of Kaido’s stay at wano.

Ryuma would’ve swept Zoro but he was not himself during the fight between the two,

Brook said they showed the same muscle strength like they were mirroring each other & as we know Oda has a funny way of foreshadowing things, When Luffy fought katakuri,

Luffy was fighting a mirror of himself within katakuri but a way stronger version with no nerf because he has to be “Pirate King”.

When Zoro and Ryuma fought, Ryuma was nerfing beyond comprehension, He didn’t acknowledge Zoro at all,

but in reality, he listens to Shushi’s call for a new master, With that being said, Zoro never touch shusui true ideal power and he has ways to go before he can hone a Truly great sword, Ryuma was way above Oden in power,

so the outcome is making Shusui a black blade. Oden was close to Achieving Black blade but was execute before so.

I believe the reason Enma acts the way she does (Enma is a girl) is because she does not respect Zoro’s swordsmanship,

that’s why she eats his Haki spirit and she didn’t do the same to Oden because he showed prowess and unwavering spirit, If you pay close attention, Zoro hesitates when he wields Enma, so she eats her Haki When he wields Enma without hesitation and in confidence,

she respects him and cuts as she should with minimal Haki Consumption that doesn’t make him falter.

What I’m trying to say is that Wano is starting to look like an Arc for Zoro background and he could be the Daimyo of Ringo. Everyone is about to get an UnGodly Power up to move forward to make Luffy “Pirate King”.

Why did Oda make Zoro save Hiyori?

Oda could’ve made anybody save Hiyori but he made Zoro do it for a reason, I believe, Oda doesn’t make mistakes and he’s known for putting slight Subliminals in one piece that blow beyond proportion. He fought Gyukimaru for Christ sake, it wasn’t just for Shusui,

Oda was showing us who Zoro is without being obvious and that’s why soon in the arc, out of all the straw hats, he looked like he belongs to Wano not because he’s just a swordsman but because when he fought Gyukimaru it looked like a time-lapse, if you pay attention to the aura of the fight it seemed a bit more friendly than hostile, The more Gyukimaru looked at Zoro the more he looked like he might recognize Zoro because Gyukimaru was always with Ushimaru but he didn’t want to believe his eyes and just followed his will to protect the graves because in his mind Ushimaru wouldn’t just rob Shusui.

Return of the Daimyo & rightful

everything I believe Onimaru will show himself to Zoro once more but on friendly terms, he will return Enma & he will Gain a sword of his Father Ushimaru or A sword that was made specifically for him that ushimaru has given Onimaru as he is a sword keeper down to Zoro

because like everyone Onimaru is waiting on Joy Boy also & once he realizes Luffy is Joy Boy he will realize who Zoro is, That he is a descendant or vessel of Ryuma.

This all might sound crazy and unrealistic but remember it’s Oda who finishes arcs with a soft finish & Mind-blowing Backstories that no one ever expects, With Sanji, it was Only Alive want poster…..For Zoro, it’ll be Shusui bringing his past back to him!

If I even have missed any great point about this topic. Kindly comment below so that everyone can share.