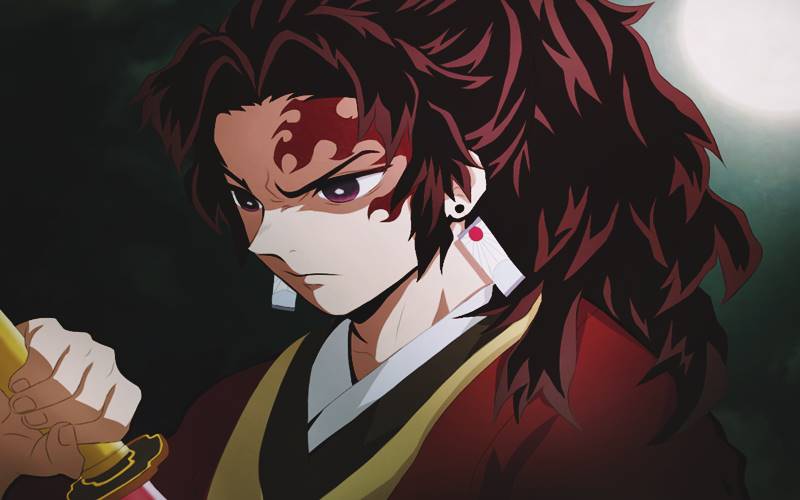 Yoriichi: Hello friends, how are you all? Today this is blog is about one of the strongest characters from demon Slayer anime, Yoriichi Tsugikuni. Yoriichi is the first known Demon slayer in the series who uses Sun’s breathing style as a fighting technique. He was the first person who discovered breathing forms by himself going through rigorous training and harsh conditions. He is said to be the strongest Demon Slayer known to date. Due to his versatile fighting style, he was the first one whom Muzan the strongest anime feared. So here are some interesting things about him.

He was born in an era where living life was very harsh. He was always surrounded by enemies who threatened him. From childhood, his father didn’t care about him and misbehaved with him. He had marked on his head Which his father thought is demonic and also tried to kill him, however, his mother got into a rage and saved him. His elder brother Kokushibo took pity on him and always helped him. Yoriichi was a silent person who didn’t utter a word until he was seven. His father hated him and tried to throw him from his house. His mother also died and after that, he left his house to live life alone and train as a Fighter.

Yoriichi was a very pale-looking person with a very weak body. As a child, he was so weak that he couldn’t stand on his own. He didn’t utter a word until he was seven and everyone thought that he is dumb. Yoriichi was born with a mark that gave him incredible power and the ability to see the bodies of living things in transparency. It was agreed that he would become a monk at the age of ten and will be sent to a temple to live his life. Though he was born with the special talent he had to grow through harsh training to achieve something.

3. Yoriichi Love for his family

From his childhood, he always loved his family, though being hated by his father for the demonic mark on his head, he didn’t hate him. His mother loved him and made him Hanafuda earrings for a good luck charm. It was later revealed that Michikatsu was to be sent to the temple and instead of Yoriichi. Yoriichi was decided to take the position of his father but he refused this because of his love for his brother. When his mother passed away, he left everything behind and left his home.

When he was a child he saw Michikatsu his elder brother using a sword to become a samurai. Yoriichi also showed his interest in becoming a samurai. He was initially mocked by the person who was teaching his elder brother, but to his surprise, Yoriichi landed may blow on that man Which shocked Michikatsu as he was never able to hit that man with his sword. Seeing this Michikatsu developed hate towards him as he was younger but surpassed him.

When Yoriichi left his home after his mother died, he ran away from his village and family. When he was on a mountain he met a girl named Uta whose entire family had died. Yoriichi and her lived together and they married each other. One day when he was out for something, his child and wife were alone at home, they were attacked and killed by a demon. When Yoriichi reached there he was shocked.  After that, he became a Demon Slayer and picked up his sword to kill demons.

Yoriichi was a person who believed in helping others no matter what happens. He remained calm in every situation even when his mother died and his wife and child died also, he showed an emotional outbreak and accepted his fate. He has shown no expression when he killed a demon, also when he fought with demonkind Muzan. Yoriichi performed his sun Breathing form when he was ask by his friend suyako but later felt shy. He taught others his sun Breathing form but no one matched him but he believed that a generation will come Which will surpass them.

7. the First one to be born with a demon slayer mark

Yoriichi was born with an unusual mark on his head which granted him supernatural abilities like increased physical powers, being born with it he live more than the average life of a person born with it. With this mark, he could see a transparent world, and achieve a selfless state. Unlike him, others have to train hard to get awaken their demon slayers mark in order to surpass their natural talent and human abilities. Unlike other marked users in his era, Yoriichi defied fate and lived about the age of 85 years. It was because of the fact that he was born with it and not like others who awakened it.

9. Love-hate with the relationship with brother

When Yoriichi saw his brother turn into a demon named Kokushibo who killed many demon slayers he was very sad. But as a member of the demon slayer, he has to fight with his brother. At the age of 85, he fought both with Muzan and Kokushibo. Though he was old he fought well but due to his age, he was not as good as before and was killed by his brother. In his last moment, he saw his brother turned into a demon and Muzan’s best demon. He was sad about that and accepted his death. After killing Yoriichi, Kokushibo also felt sad and showed disgust on himself killing his own younger brother. Yoriichi landed his final blow and killed Yoriichi and took his flute with him.