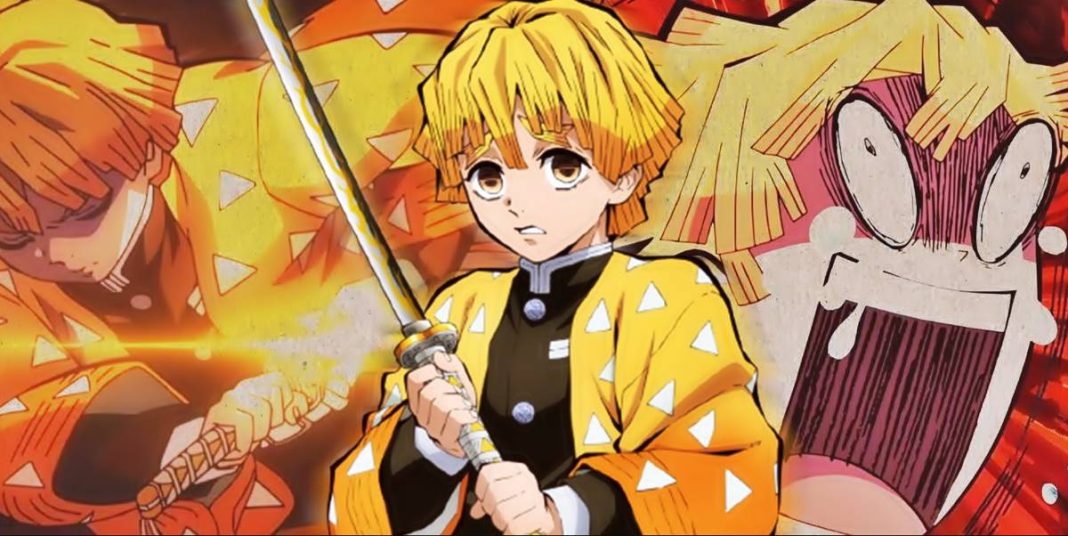 Zenitsu: Hello friends. He is a character in the Anime series Demon slayer. Zenitsu is a male character in the series with orange hair color and brown to gold eyes colors. He is seen alongside the main character Tanjiro. Here are some facts about Zenitsu Agatsuma.

Most of the time Zenitsu is shown to be a coward and self-doubting in the person. Though being powerful he is so much afraid of the demons that he barely fights them into one person and always decides to hide or run away from demons. He hides behind Tanjiro or the person who is with him. He is so afraid that he loses his consciousness when he faces demons. Zenitsu also runs away from the duty of being a demon slayer.

Although being strong he always doubts himself. Even after passing the exam of demon slayer corps he was shocked how passed the test. He always runs away from demons. He is always thinking about quitting the job of demon slayer. Zenitsu thinks that the job is too difficult. He has very low self-esteem being so strong. He always screams and shouts when he sees the demon. Zenitsu always annoys the people around him.

Though being he is so coward and runs away from demons. He has a lot of respect towards Tanjiro and anyone who saves his life. Being able to learn new things and thus helping others. He always respected his master though he also shouted at him. Zenitsu always helped them in a difficult situation against the Slayer of the demon. He has a deep respect for his mother and sudden regret that he couldn’t save his master when his master was killed by one of his students who was turned into a demon named Kaigaku (one of the 12 moons). Later in the series, he avenges his master death by killing kaigaku

He is always seen protecting others even when he is unable to fight. Many times he is seen protecting Nezuko from the demon slayers and other comrades. When in danger and also protect others. He hates himself for his cowardly behavior and manages to strive more. When he sees his friends in danger his cowardness vanished and he goes into another form where he is protecting his friends at any cost without thinking about his own life. He seems to be a very nice person.

From the episode when he was introduced he is begging a girl to become his girlfriend. He is always attractive to girls. Zenitsu thinks that if he singles it would be easier to be kill. He always hits on girls who are cute and asks to marry them. But whenever some girls try to flirt with Tanjiro and Inosuke he goes mad and asks them to complain against him and make them jealous. Most of the times he is also seen running after girls.

He has a huge crush on nezuko immediately after knowing and seeing her First time. He asks Tanjiro to let him marry her. Even after knowing that’s Nezuko is a demon he is very kind towards her and always protecting her from demon slayer. He always runs behind Nezuko. Zenitsu openly accepts his love for Nezuko. He lashes out at anyone who tried to kill Nezuko. That shows how deeply he loves Nezuko. He always protects her and in later times he is seen to marry her.

7. Connection with  Inosuke and Tanjiro

It is always seen that he cares for every person he is with and connection with anyone. When he first met Tanjiro he asks him to become his friend. He also helped inosuke in many times. He always helps them in many things like when there is a fight between Tanjiro and Inosuke he make them good friends. . Them He is seen mostly crying but when he is with them he always cheers them up by screams them and making taunts at them. But he is so good and friends and funny person that no one can hate him.

When he is afraid while facing a demon he enters in sleeping mode. While sleeping he changes his personality into someone who is a much faster and dangerous fighter. He goes in asleep such that he is doing it himself but unaware of what is happening. He after finishing the demon wakes up and suddenly forgets everything which he has done to demons and starts crying again.

Though being a coward,  He is a very talented and skilled demon slayer. He has terrific speed when he is fighting when he sleeps and then wakes up. and fight with demons. Zenitsu always helped his friends. He possesses indomitable willpower which helps in the fight. Even when sleep fighting. He has shown incredible judgment and tactics. His stamina and endurance are unmatch by anyone. Besides that, he also possesses high intelligence and perception.

He has also shown his new breathing style which is Thunder Breathing. Zenitsu also says high skills using this form. He derived it from sun breathing techniques. When taught by his grand teacher or sensei he was unable to learn a form because he was very frightened and scared of this form. He learns only six forms of the techniques out of which he is seen to only use one form which is thunderclap and flash.  This helps him in attaining a godspeed. At this speed, he can’t be seen by anyone even demons. The form of Breathing is also very useful because this form enhances the user’s abilities to move in a fight especially against demons with fast speed and regeneration.